In our previous articles on the topic of Matter, we have discussed that all matter has mass and occupies space. Students tend to understand the concept of the properties of matter but encounter difficulty in applying the concept when answering questions.

In this article, we will be going through the thought process on how to tackle a different type of application questions testing on the properties of matter. Additionally, we will also analyse a bonus question that has confused many students.

What I'll Be Sharing In This Article hide
1. Background Information
2. Scenario #1: Applying a Force on the Gas
3. Scenario #2: Adding More Gas into the Same Container
4. Let’s Try A Question
5. How Would Volume & Mass Change Under Different Conditions?
6. Let’s Try A Bonus Question!

Firstly, let’s recall what are the properties of the three different states of matter: solid, liquid and gas.

So, what does it mean by “gases can be compressed”?

To put it simply, what this statement actually means is that gases can be squeezed. Many of you know that compression of gases is caused by applying a force onto the gas.

Did you know that we can also cause gases to be compressed by adding more gas into the same container?

To understand the concept of compression of gases better, here are some diagrams to help you visualise: Let’s take one black ball as one unit of solid particle. As seen in the diagram above, solid particles are closely packed to each other. Hence, similarly, the liquid particles would not be able to compress even when a force is applied to them. As mentioned earlier, compression can occur in two scenarios for gases.

Scenario #1: Applying a Force on the Gas

This scenario occurs when the container of the gas becomes smaller, as seen in the diagram below. This pushes the gas particles closer to each other, reducing the “empty space” between the gas particles, which is also known as COMPRESSION. Now that we’ve revisited the properties of the different states of matter and delved deeper into the concept of compression, let’s take a look at the following question! Part (A): Air can still be pumped into the inflatable mattress even when it is fully inflated. State a property of air that allows this to take place.

Firstly, we need to identify that the state of matter of air is gas.

One property of gas is that it has no definite volume and can be compressed. Hence, even when the mattress is fully inflated, air can still be pumped into the mattress as there are “empty spaces” between the air particles, just like in the aforementioned Scenario #2.

Air does not have a definite volume and can be compressed.

Part (B): Will the mass of the inflatable mattress increase, decrease or remain the same after more air is pumped into it? Give a reason for your answer.

Part (C): When the inflatable mattress is left in the hot sun for a few hours, it became firmer. Explain why.

The air in the mattress gained heat from the sun and expanded and increased in volume. The expanded air will exert a greater push force against the inner walls of the mattress, causing the mattress to become firmer.

How Would Volume & Mass Change Under Different Conditions?

Let’s now take a look at the following conditions and determine under what situations would the volume and/or mass of gases change or remain the same!

This can occur when you decrease the size of the container but do not add or remove any matter from the container.

One common example is the action of pushing the syringe filled with air.

As seen from the diagram above, the syringe was filled with air with its tip sealed so that no air can escape. When a force is applied by pushing the plunger in, the air becomes compressed. Hence, the space taken up by the air is now smaller (as seen below). This shows that there is a decrease in the volume of the gas (although the mass of the gas remains the same). This is an example of COMPRESSION, by applying force on the gas.

When the mass increases, it means that more matter has been put into the container. However, as the container (solid – has a definite volume) did not change its size, the volume of the gas would remain the same.

This is also another example of COMPRESSION by adding more gas into the same container. This is similar to Part (B) of the question we’ve just analysed.

As the mass of the gas remains the same, we’re able to conclude that there is no addition or removal of gas from the container. How can the volume increase with no increase in mass?

A classic example of this will be one of the Heat Energy questions in the from our CCI™ (Complete Concept Integration) course.

“How do we remove the cork from the bottle without touching the bottle?” As seen from the above diagram, the cork can be removed from the bottle by applying heat to the bottle! When the air in the bottle gains heat from the heat source, it expands and increases in volume.

The expansion of air in the bottle would exert a push force on the cork, pushing it out of the bottle (as indicated by the arrow). This is an example of EXPANSION.

A common example of this can be seen when you hold parties at home!

When you try to inflate a balloon, you blow air into the balloon (as indicated by the arrow in the diagram below). This causes more air to enter the balloon, increasing the amount of matter in the balloon. Thus, the mass of the gas in the balloon increases.

After reading this article, I hope you are now more confident in answering questions that involve applying the concept of the properties of matter.

Before you go, why not try the following question?

If I take 100 cm³ of air out from a container with a capacity of 500 cm³, what is the volume of air left in the container? 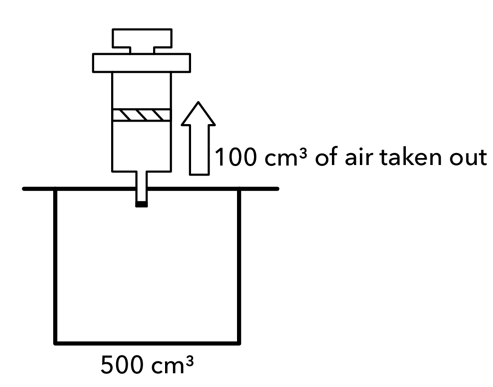 The correct answer is 500 cm³! This is because air has no definite volume. Air would expand to occupy the extra space in the container, causing the volume of air in the container to remain the SAME at 500 cm³.

Note: The MASS of the gas decreases as air is taken out since matter is being removed from the container. If you like our methodology, please click here to explore our Matter Techniques™ Masterclass for P5 & P6 students.

Over the past 9 years, she has worked with students from a wide spectrum of backgrounds – from the extremely weak to the highly gifted. This is accompanied by an impressive track record of having 80% of her students score As and A*s in the PSLE Science examination. As a Psychology graduate from the National University of Singapore, she actively seeks to use child psychology techniques to get her students to be intrinsically motivated to learn Science. Her secret lies in helping the child rediscover their interest for learning through her wide arsenal of humorous and inspiring teaching methods. A Beginner’s Guide To Properties Of Matter