I believe it has been quite some time since many of us have travelled overseas. 😭

Since I really missed travelling, I took a trip down the memory lane and browsed through some photos from my trip to Changsha, China in 2019!

One of the main highlights of my trip was riding on a Maglev train. I had previously heard from my friends about their exciting experiences but never had the opportunity to experience it myself as Maglev trains only operate in very few countries – Japan, South Korea and China.

During the ride, I experienced the incredible speed that the Maglev train moves at. The highest speed of this train is 431 km/h!

Did you know that the Maglev train actually levitates (floats above the track)?

This levitation is achieved through the use of magnets!

As such, I have selected a question on Magnets from the 2018 P4 Nan Hua Primary School (NHPS) P4 SA2 Examination Paper for discussion. Read on to learn the science behind the Maglev trains! Let’s take a closer look at the observations provided in the question.

Observation 1: When Bar X was brought near to Pole A of Bar Y, Bar Y moved towards Bar X.

When discussing this observation, I will ask my students the following question:

“What can you conclude from the above observation?”

Students will typically give either of the following answers:

Only one of the above answers is correct. Which answer do you think is correct?

⚠️ Misconception Alert: Some students may think that since Pole A of Bar Y was attracted to Bar X, it might be because both Bars X and Y are magnets and their unlike poles are facing each other, causing them to attract.

While this scenario is possible, we are unable to conclude that this is definitely true at this point as there is also a possibility that only one of the bars is a magnet and the other is only made of magnetic material but is not a magnet. The keyword in the question is “conclude”, which requires the answer to be definitely true. Thus, if you chose B, your answer is incorrect as we are unable to reach this conclusion at this point.

In this scenario, regardless of whether both bars are actually magnets, we can only definitely conclude that one of the bars is a magnet and the other bar is made of magnetic material as these are the basic conditions for attraction to occur. Thus, A is correct!

In order to determine if Bars X & Y are both magnets or if only one of them is a magnet and the other is made of magnetic material, we will have to take a look at the second diagram.

Observation 2: When the same end of Bar X was brought near to Pole B of Bar Y, Bar Y moved towards Bar X.

Based on both observations so far, we are able to determine that both Poles A & B of Bar Y are attracted to the same end of Bar X. Thus, we are able to conclude that either Bar X or Y is a magnet and the other is made of magnetic material only (and not a magnet).

However, we are unable to identify whether Bar X or Y is the magnet or made of magnetic material at this point.

Now that we have identified that Bar X is a magnet, we can now determine that Bar Y is made of magnetic material only. Thus, we are able to conclude the following:

Let’s take a look at the options given again:

Based on the conclusions we have made from Observations 1 to 3, we are able to conclude that A & B are correct. Let’s take a look at why C & D are incorrect:

C: Bar X will repel both ends of Bar Y.

Since Bar X is a magnet while Bar Y is a magnetic material, Bar X will attract both ends of Bar Y instead of repelling them.

D: Bar Z will repel both ends of Bar Y.

Since Bar Z is a magnet while Bar Y is a magnetic material, Bar Z will attract both ends of Bar Y instead of repelling them.

Thus, the correct answer is Option (1).

Besides interactions such as attraction and repulsion between objects, it is possible for there to be no interaction at all.

Are you able to think of the possible scenarios when two objects, P & Q, are brought close to each other but remain in their positions?

Thus, we are unable to conclusively determine the identities of Objects P & Q when there is no interaction between them.

Let’s summarise the 3 possible outcomes and the conclusions (if any) about the identities of Objects P & Q that we’ll able to arrive at, which will be helpful if you are tackling similar questions in the future.

Remember what motivated me to write this blogpost? Yes, it is the Maglev train! For the train to levitate on the track, there must be repulsion occurring. Objects Y and Z in the diagram below must push each other away, in order for the train to float above the track. 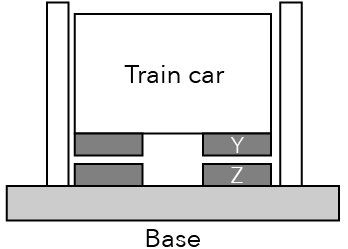 Question: Based on what you have learnt earlier, can you identify Objects Y and Z?

Answer: Since Objects Y and Z are repelling each other, they must be magnets as only magnets with like poles facing each other can repel!

Food for Thought: Advantage of Levitation

You might be wondering how trains that levitate are able to move faster. *Friction is a type of force which is present when two objects rub against each other. It causes moving objects to slow down. This type of force will be covered in greater detail in Primary 6! With a Bachelor’s degree in Physics from the National University of Singapore (NUS), he has a good mastery of Science concepts and is fully equipped to clarify common scientific misconceptions among students. Over the past seven years, he has worked closely with primary school students with differing academic abilities. He is well-loved among his students for his patience in guiding them through the thought processes and answering techniques required to excel in the PSLE Science examination. Ensuring that the students enjoy his lessons is his top priority. In order to do so, he constantly integrates real-life examples and stories into his lessons to pique his students’ interest in Science. Light Energy: Why Does the Length of a Shadow Change? What Are Template Answers & Why Do They Matter?